Heritage Hall will be hosting Latin nights this Friday, Dec. 2nd in Paia!

Stephen Smith, @mauidancesmith , a wonderful and fun salsa/rueda/bachata instructor on Maui will be teaching an Intro salsa lesson beginning at 8:00 til the band starts at 8:30 as part of the $15 adults/ $10 under 18 cover at the door. Stephen Smith teaches rueda at the Heritage Hall on Wed. Nights and bachata on tues nights in Wailuku.

Tio’s Tasty Tacos will NOT be there this friday as Eduardo is almost but not quite ready to return back to the Hall and hopefully we will be able to celebrate his return next friday!!!So please plan on eating dinner before (or after!) you come this friday night.

All ages are welcome and you may bring your own beverages (alcoholic or non-alcoholic)!

There is good ventilation and ample room for dancing as well as seating!

Heritage Hall is located at 401 Baldwin Ave. at the top of Paia across from the Old Sugar Mill.

We hope to see you there …old friends and new!

I have the exquisite pleasure of presenting some of my friends on this song I composed entitled “ What You Need”…At such an interesting time in each one of our lives these beloveds all recorded their own super sweet musings and made the assembling of the clips one of the most fun labors of love I have done in a long time!!

In quarantine I have taken the freedom to name my co-conspirators in this daence play “the Quarantinos” they are: Rizca Perkins , Kehaunani Kaauwaii , Stephen Smith , Julia Alexandra Crespo Tiger Tabby, Marchello and Cristina and Touque!!! Mahalo to Lisanna Gabriel for her help as well with the costume of some crazy painter who dropped by!!

It is but a small gesture of my longing for the wonderful friday nights at Heritage Hall where so many lovely smiles adorn the dance floor and my band of brothers in Rio Ritmo get to groove together. I hope everyone is doing well and holding strong…Ever strong and healthy! We will be back dancing again soon!!!

This song is one that wrote itself …and if it touched the heart of one person then the Cosmos is grateful to have made that connection…could be someone I don’t even know really. Yet am grateful to have been in a place to guide it through to her (or him?! lol)

You can stream the performance on facebook at https://www.facebook.com/mauicoffeeattic/ on friday afternoon and we can pau hana together on the airwaves. 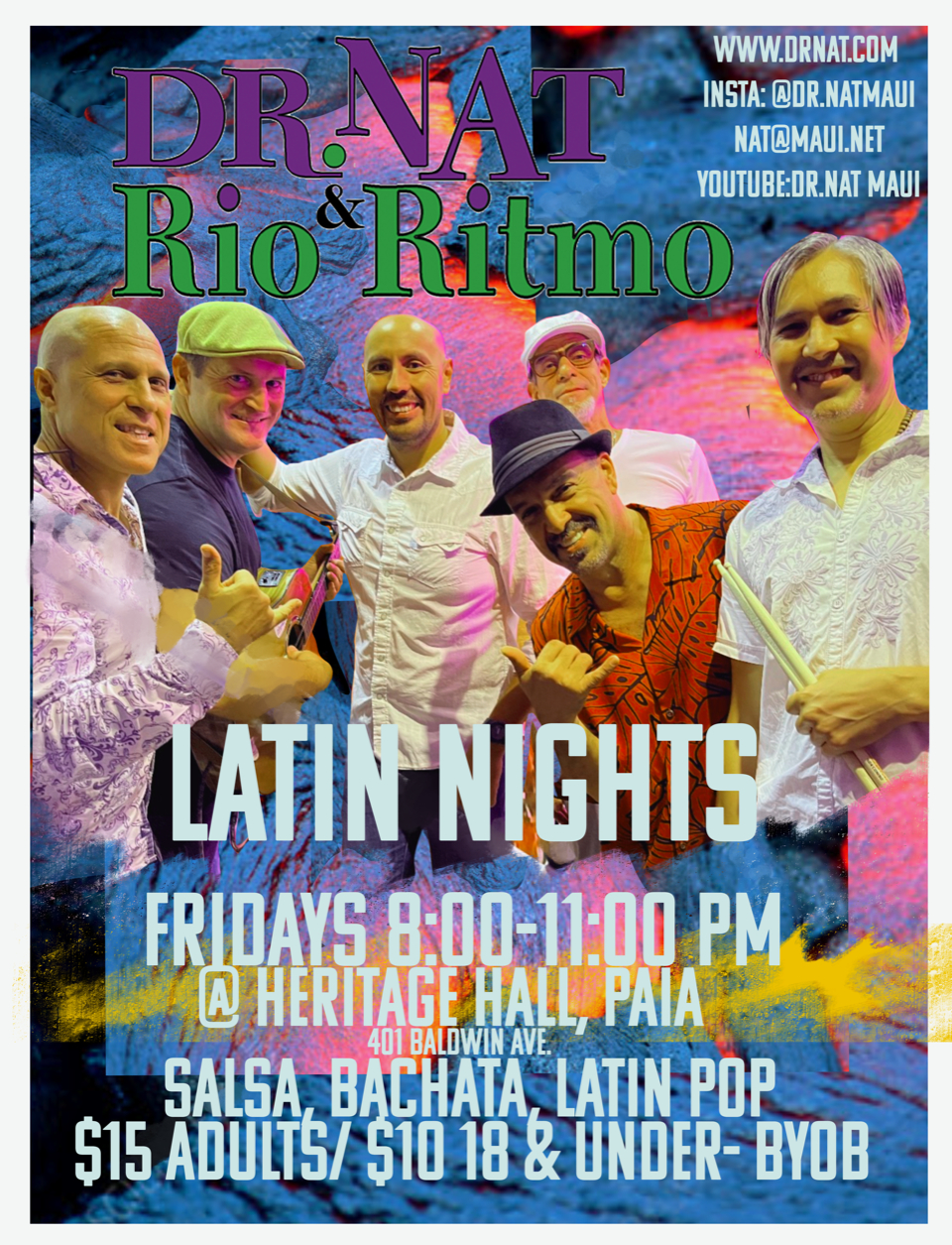 Opens in a new tab..

to view demos at http://drnat.com/musician/media/videos/ ….

Dr. Nat is a vocalist, guitarist, percussionist, dancer, capoeirista, composer, actor, radio dj and producer. Born in Buenos Aires to Chilean and U.S. American parents, Nat’s music reflects his cultural heritage as well. Blends of cross global polyrythmic styles comprise Nat’s original repertoire of compositions. Nat’s extensive travels through the Caribbean and Central and South America have infused his songs with a spicy river of rhythms (birthplace of “Rio Ritmo “) His songs resonate from the Islands with Afro Cuban rumba, timba, and son rhythms, Jamaican reggae and Brazilian sambas and capoeira grooves, as well as lush harmony, Hawaiian-inspired ballads… irresistible dance grooves to hypnotic lullabies. They take the listener on a voyage into the world of sound and rhythm with Chilean charangos, Brazilian berimbaus and Cuban Tres all woven together with Nat’s dynamic tenor vocals. A healer, his themes reflect upon this life’s journey and his love for the Great Mystery. They are commentary on healing, self-discovery, consciousness and love. His songs express the joy of this journey through insightful and inspiring, sometimes humorous and bluesy lyrics. Ultimately, Nat’s Doctor is the music which transmits via universal translation-

For fans of the Dr. Nat radio program second Saturdays on Manao Hana Hou radio after 12 years I will be taking a sabbatical from the airwaves.  I thank you those of you who encouraged me to continue these years and gave me an audience to play my favorite artists on my favorite radio station.  I hope I will return to the airwaves sometime in the future but a redirection was due and I will focus my energy in other endeavors for a while. Mahalo, Grazie, Gracias, Merci, Obrigado …thank you ….Mana Hana Hou ohana….and you the listener!

The Rio Ritmo band can and will play other genre songs pending the event. The other styles include Reggae, Jazz, Pop rock and Contemporary.

Dr. Nat will no longer be deejaying Manao Hana Hou radio second Saturdays of each month. After deejaying with Manao Radio for about 12 years a sabbatical was taken.

Note: to date Dr. Nat and Rio Ritmo has the longest run in the Casanova’s history having played consecutive Fridays beginning in 1998 and running through 2003 and has played the most total number of performances in the history of the club for any band. 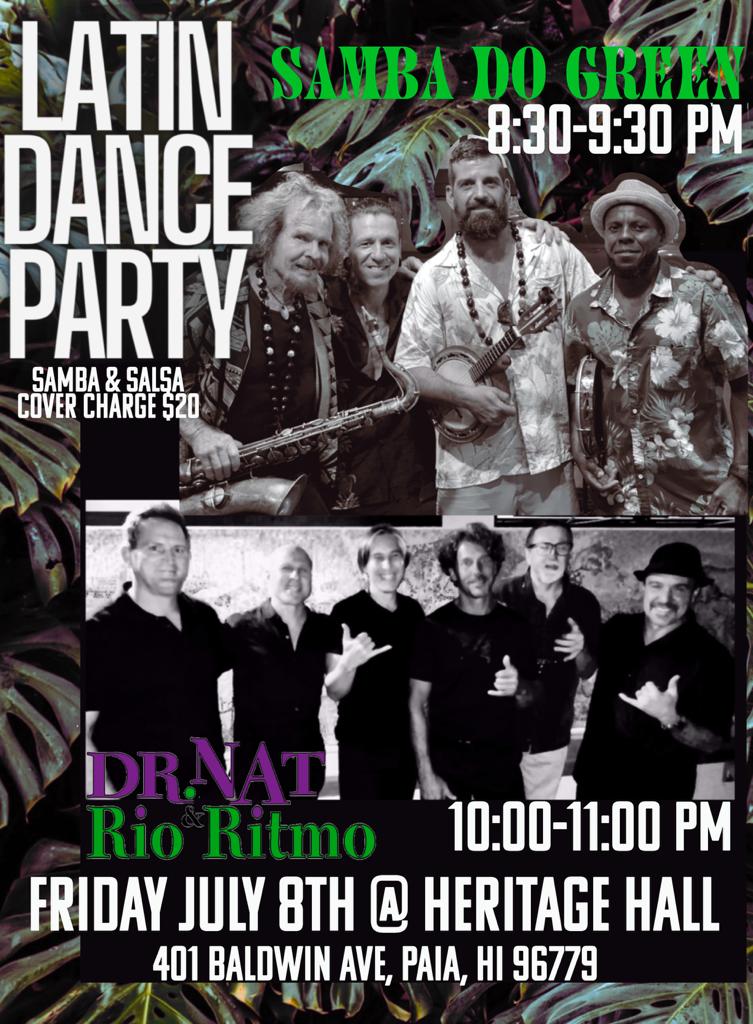 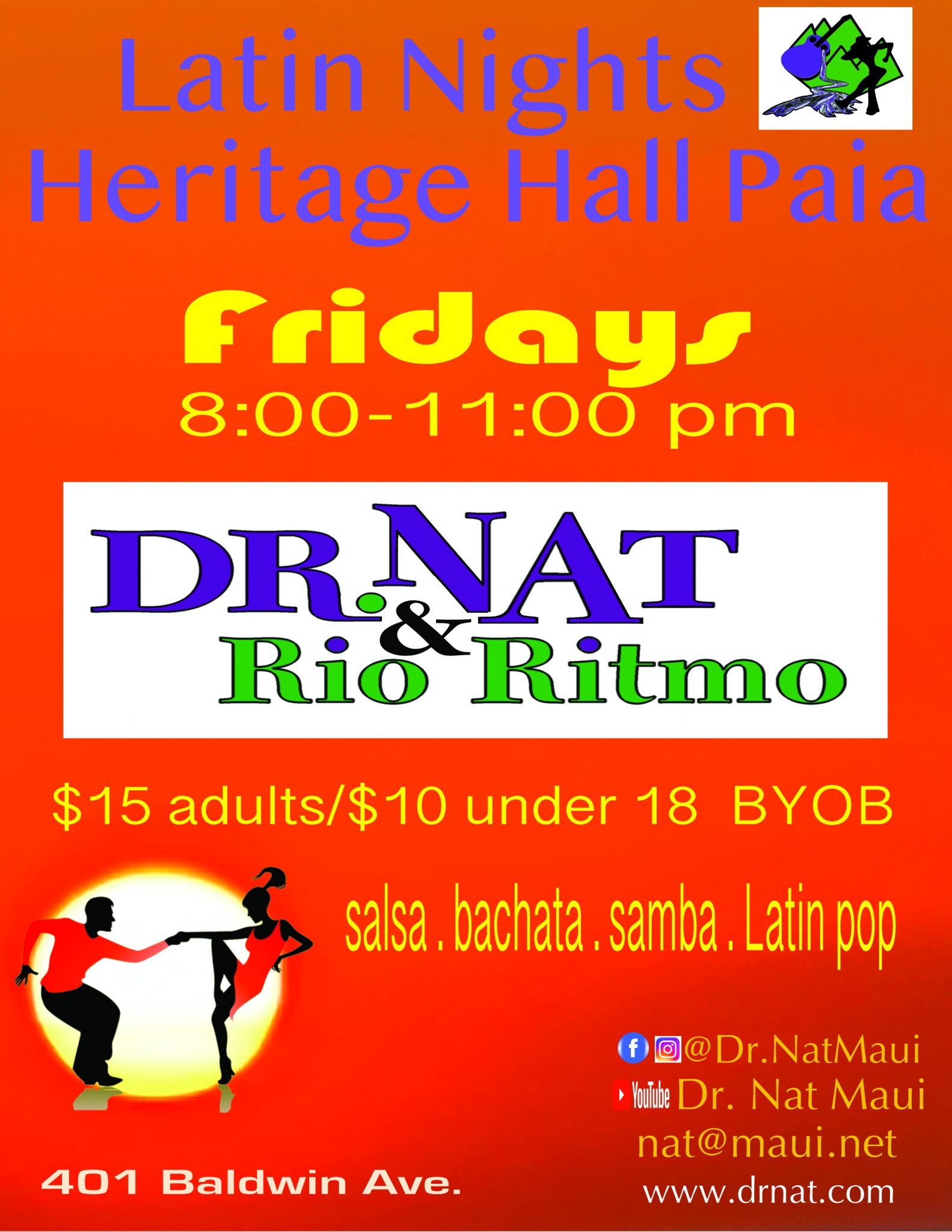 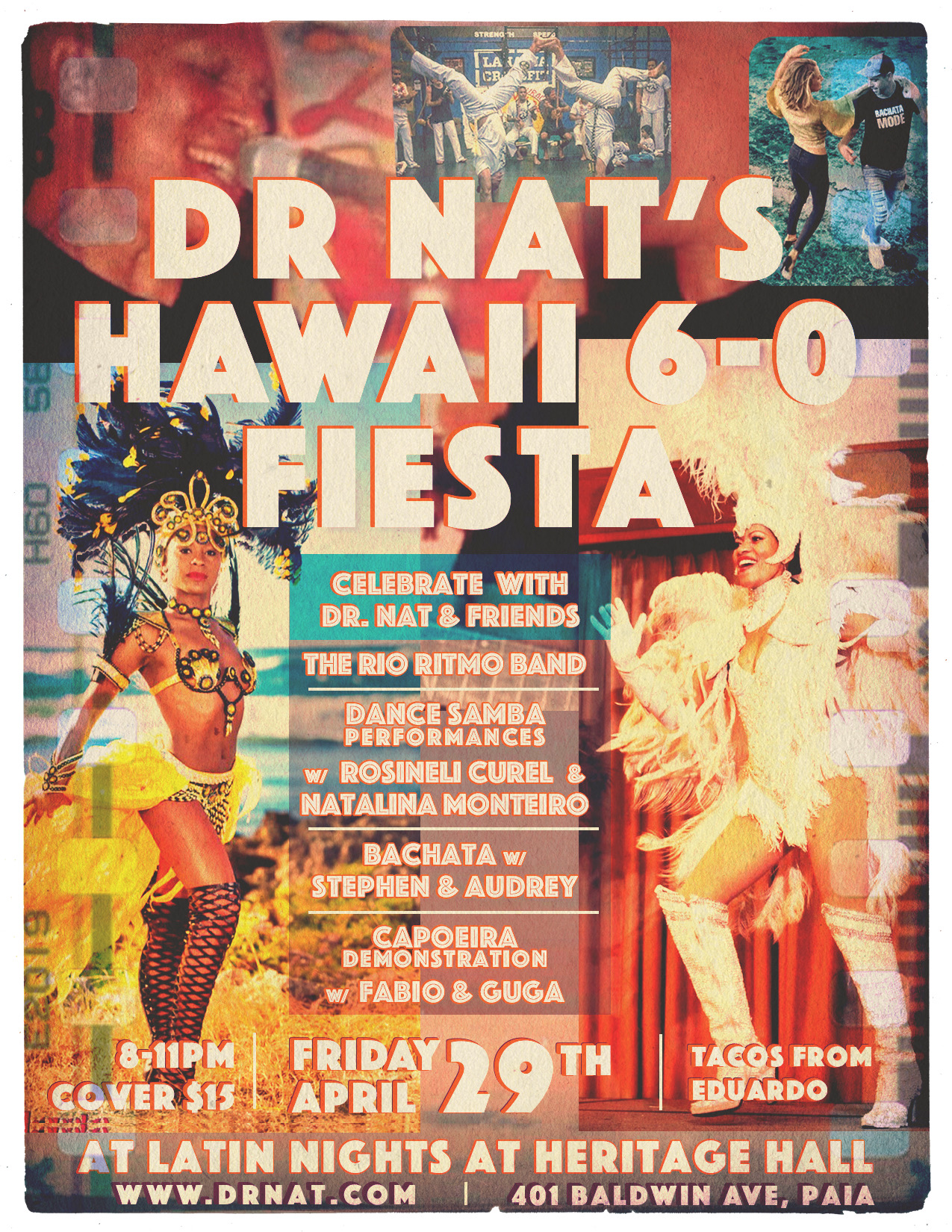 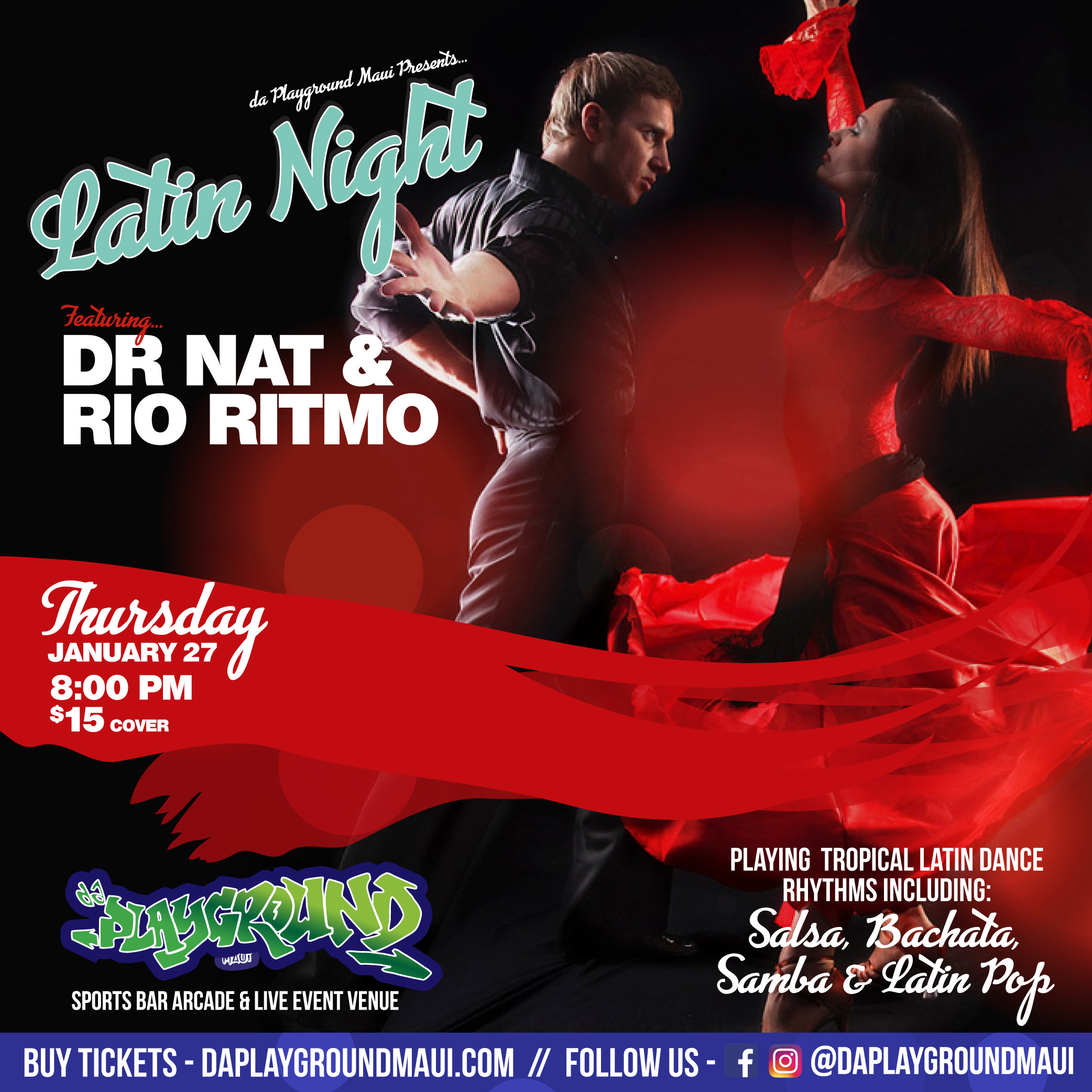 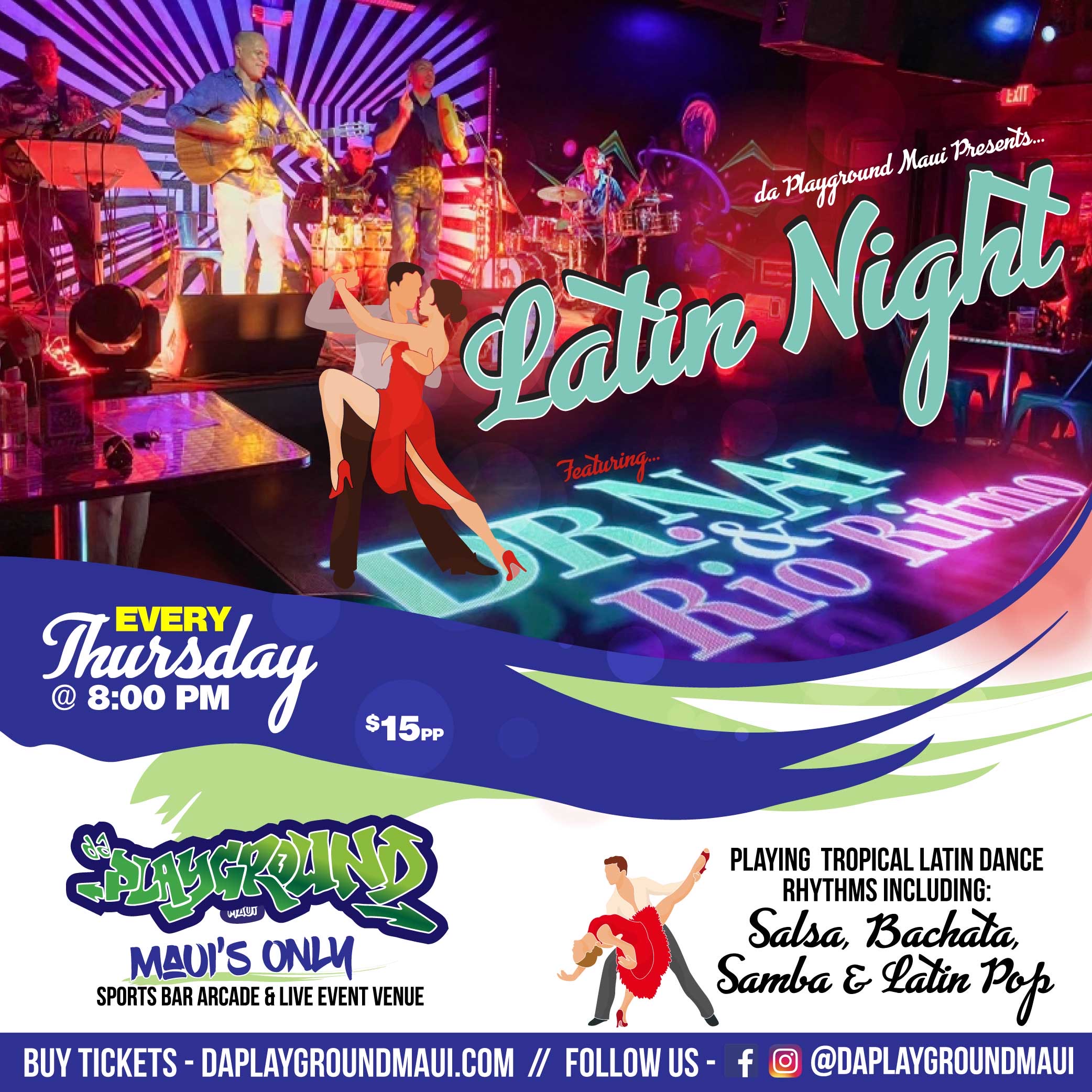